‘Brawling in Bangkok’, Vote for me please…

Their policies and promises can be found all around, on the net, in the papers, blaring through radio as well as television, and it is far too serious to be discussed here.

In Thailand, one of the traditional way is to use these huge rectangular cutouts usually with a photo, a number and a single catch phase, and placing them all over the streets. It has become such a norm that we all have became kind of immune to it. The only purpose that it still serves is to remind the voters of the number associated with the candidate, so that one can put an ‘X’ next to the right number on March 3rd.

If one was to judge on the amount of the cutouts alone, it looks like we only have 2 candidates running for office, SP and PP, and it is turning out to be a very close race indeed. But if you look at the images below, who the %$## would want to vote for this guy (PP)?

I wondered (sincerely) which team PP hired to do his photos? More interestingly who on earth approved it! There must be someone sitting in a very comfortable chair approving these placards while sipping on a glass of very expensive wine, there must be, right? Obvious not... 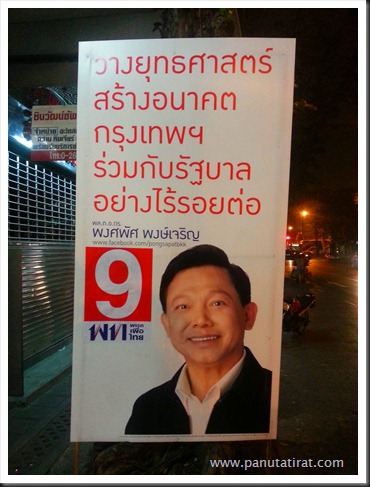 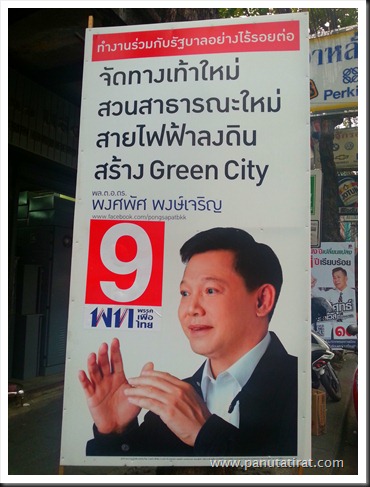 I am waiting to see PP’s third placard, keeping my fingers crossed to see something more befitting to a candidate that could be our next Governor of Bangkok.

In comparison SP is playing it safe, the ‘Hollywood’ smiles are everywhere (same as other candidates), the message is vague (same as other candidates), but nonetheless 16 is the number to vote for if you like him (sorry, I meant if you like his policies and believe that he can do all of it within the next 4 years, actually this would be the same for all of the candidates, can any of them do what they are promising right now?) 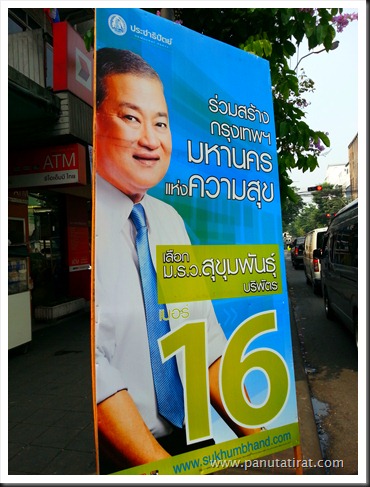 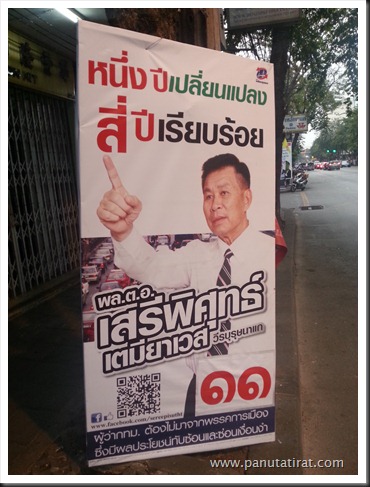 Obviously winning and loosing isn't going to be solely depending on how well one executes these placards, there are of course the policies and other spices to be thrown into the pot. Politics is a funny thing around here, just like a poor forward drive, the follow through is just isn't there nowadays :)