After the Children had sung

All parents of EY2 were invited to attend a mini singing session today :) the whole of EY2 was putting on a performance, and what a performance it was! Each class took turn to take lead in a song while the remain classes sing along as well. One of the teacher reminded all parents not to concentrate so much on taking videos and photos but to also enjoy the performance… well said :) of course it felt like she was speaking personally to me (I’d even thought she was going to mention me by name, then I realised that I have no idea who she was :) )

One of the teacher was kind enough to offer to take our photo as a family (and there are not nearly enough family photos of all of us together, so I was over the moon), and then you decided it was against your religion to look at the camera… instead you had chosen to look at the teacher’s feet… :) seng jing jing, haa haa haa.

Once again I have decided not to post the photos of you singing as your friends would be on it as well and that would have been wrong without their parents permission :) 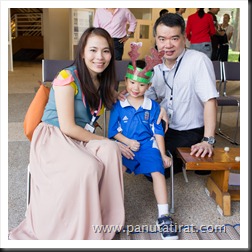