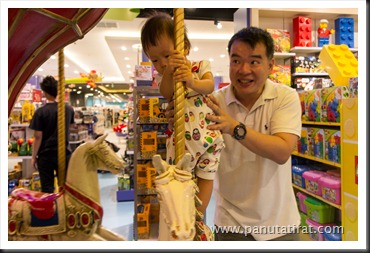 There is a small merry-go-round in one of the most well known department store in Thailand.

The speed of which it moves is not too far off one of those protons hurling down the Large Hadron Collider.

Together with the speed and your insistent on standing room only, meant I had to run around the merry-go-round holding you by the waist while trying to keep a calm face :) I thought I did alright, until I saw the photos that your mother took, and this is one of the better ones :)

Of course like all children, one round on a merry-go-round can never be enough :) trying to pull you off after the first round, I had thought someone put superglue on your hands (unfortunately we don’t have a photo of that).

I believe it was the fourth round when I had said enough was enough, there was no other choice as it was either a heart attack or lunch, and I was feeling awfully peckish.