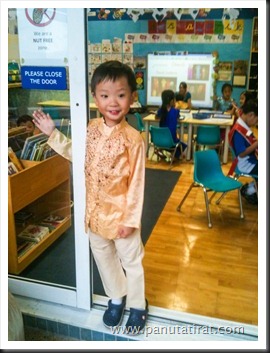 Today [12.11.12] I knew something was not right as soon as I have turned into the school’s gates, the familiar blue/white shirts and blue shorts were nowhere to be seen :) Instead I thought I had just driven into India :) Then it hits me like an elephant standing on a cement block whilst dropping from Burj Dubai, it’s the Diwali festival.

The whole school was supposed to dress up in traditional Indian clothes for the Diwali festival... I know how you are baby, so while we were still in the car I briefed you the whole situation, and you seemed pretty cool with it, that was until we got to your class.

The level of energy was high, parents were making fuss (I usually would make the biggest fuss of all) taking photos of their child/children and friends. Everyday you would be like little ‘Tigger’ coming into class, but not today, you were more like ‘Piglet’ haa haa haa, sorry baby, but it was so strange to see you so quiet.

I called your mother to inform her of the woeful :) situation, a few seconds later she called back, your auntie Tip was on her way to school with your change of clothes, at first I had thought it was a bit of an over kill, but after hindsight, your mother was absolutely right (again), by motorcycle it took less than 10 minutes from our house to the school.

In the meantime I went back to your class to tell you that the clothes were coming, the slight smile was more than enough, luckily a couple of your friends had also forgotten to dress up but they didn’t seem to be affected by it :)

The sky was dark and a few drops of rain had already fallen, I had to run for cover when your auntie came up in her white motorcycle, I of course could not have been thankful enough. After giving the clothes to the class helper, I’d waited... the smile was back, the bounce was back and the laughter was back, what else can I say :)