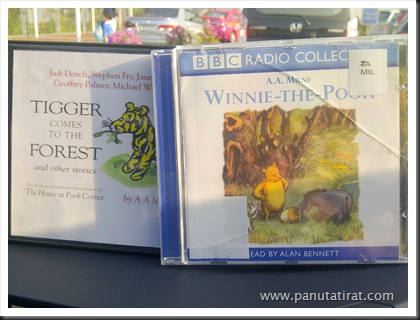 You got me hooked on Winnie the Pooh audiobooks :) Even when I have dropped you off, the first thing I do is to continue listening to the stories. The dramatisation and read version are just as good as each other, everything is really down to the writing of the stories, Mr. A. A. Milne is truly first class.

Although I was surprise that Tigger didn’t make an appearance until quite late on in the storyline. Tigger seems to play a huge role in modern Pooh Bear stories. I can not stop smiling on the love that is full of competitiveness between Piglet and Pooh, wow.

I also didn’t know that there were only two books from A. A. Milne, moreover, the characters were based on real people such as his son Christopher Robin Milne :)

What is my favourite line from all the original stories?

Kanga: “Roo dear that’s not the way to talk to somebody who can spell Tuesday”

On the audiobook, it was read by Dame Judi Dench, in a slight Australian accent... :)