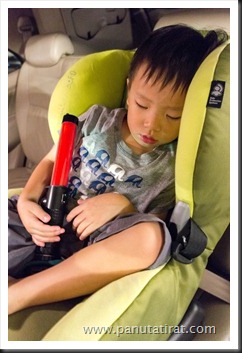 From behind her back, she (my mother) teased you with a glimpse of something unknown and different, red in colour and just the right size for your hand :) After that glimpse everything in the entire universe became irrelevant to you.

As per her expectation, you felt in love with it straight away, to be honest I had thought she’d bought you light saber (of course not a real one, not even ‘Klong Tom’ would have that!)

It turned out to be something even more brilliant :) I think the traffic police uses them, at a push of a button it shone ‘bright’ red, another push the angry red light flashes, another push turned on the halogen torch… wow, the second button was the highlight for you and a total nightmare for us.

The second button sends out a sound of such pure ‘annoyance’, it could drive a hardcore PETA member to club an entire field of adorable baby seals.

We could live with the flashing lights, we could live with how you two have become inseparable (even in the shower)… but we have forbid you to push the second button, because if you push that button one more time I promise you I’d do something so horrible that even the devil would turn me away from La Porte de l'Enfer, :) haa haa haa.