A rough couple of weeks :) 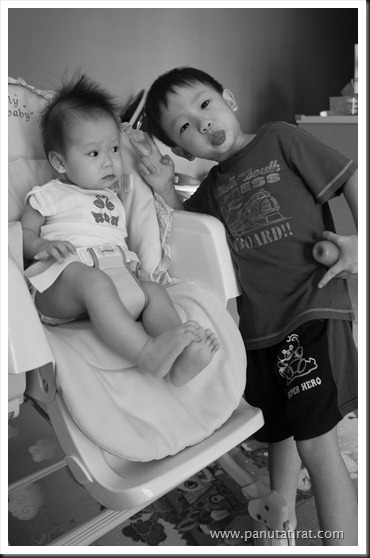 Wow, what a rough couple of weeks for all of us, there was and still is an outbreak of Hand Foot Mouth Disease “HFMD”, the first I’d heard of this outbreak was a couple of weeks ago in Cambodia, where this certain strain of HFMD was lethal and had taken many lives around the Thai - Cambodia border.

Fortunately the strain that is spreading in Bangkok isn’t lethal (however, many schools have been temporarily closed). Matt was the first one who had high temperature, as it happened, the day was Friday the 13th. Jason didn’t call but the teacher did, and had asked Gio to come and take Matt home, because Matt was suffering from a fever. After the hospital visit, Dr. diagnosed him with HFMD, but his temperature never went beyond 38c, and he hadn’t developed the tell tale lumps in this throat, hands and feet, subsequently after just a day he was as right as rain again. Then he had a big fall at the summer school (16th) (another visit to the Dr.), after several x-ray sessions (they just couldn’t get it right) he walked away with nothing more than a swollen arm and hand in a sling.

It must have been only a couple of days later that Marcella then developed high temperature, this time it went beyond 38c, so yet another trip to the Dr. for your mother. I was very worried here with her being so young, and she was nowhere near her cheerful self.

Your mother was a bit miffed when she had to spend the total of four hours at the hospital for Marcella, only to walk away with only uncertainties and were told to come back the following day. Next day another three hours were spent at the hospital, this time the Dr. again diagnosed HFMD.

So at home we now have one kid with his right arm identical to Hell Boy (haa haa haa) and a little baby recovering from being the human torch :) but things are improving and everyone should be back to normal in a few days (fingers crossed).