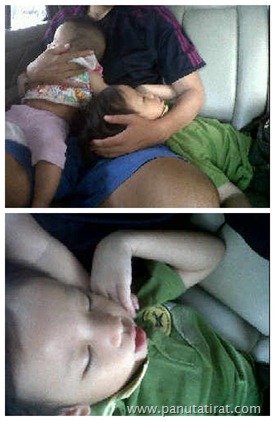 Your mother sent me a couple of photos via BB, it was taken today on your way back from visiting my parents, Matt was given a new bicycle although I must say his rational on choosing this bike was simply sensational, “because it had a flag”. Anyway, Marcella also had a fantastic time apparently she spent the whole time laughing.

The pictures were just a couple of snap shots, probably taken while the car was stuck in traffic or stopping at the traffic lights (I hope), so the quality doesn’t matter.

Apparently Marcella was being her playful self, but Matt was getting a little tired so he went back to the rear seat to play with Marcella, and not long after both felt asleep, still hold each other’s hand :) That was why your mother sent me these pictures :) (I wonder how your mother took the close up shot?)